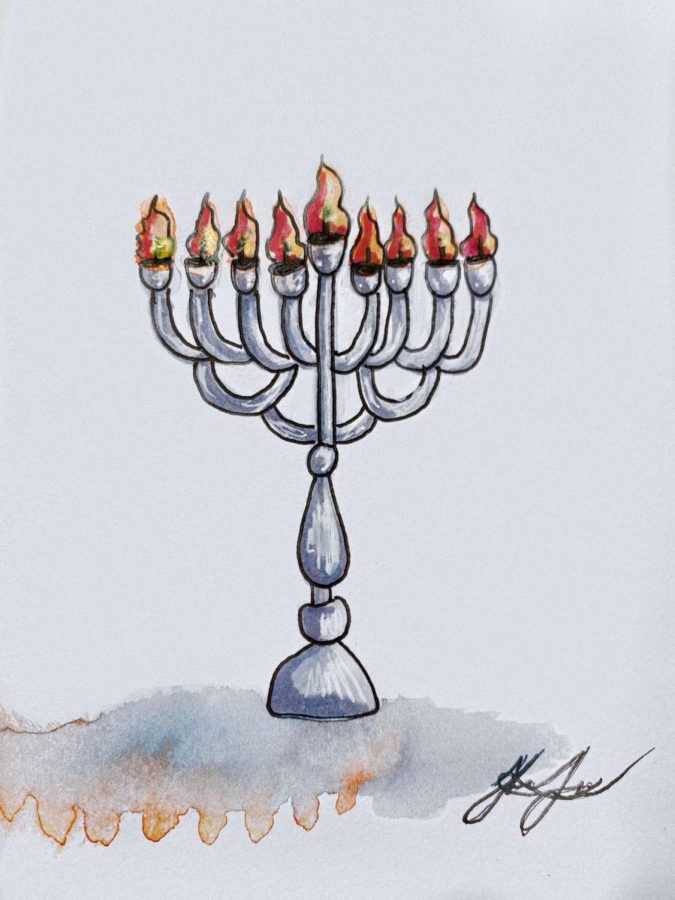 A drawing of the symbol of Hanukkah, the Menorah, or the nine candles that represent the days that the Temple lantern blazed. The drawing was done by a Lindbergh art student, Hal Lueking, who wants more representation for lesser known holidays.

Over two billion celebrate Christmas in the world along with the majority of Lindbergh students.  Although Christmas is a popular holiday at LHS, it is also important to recognize the variety of other holidays that millions of people celebrate around the world during this time of year. Although Christmas is a very widely-celebrated holiday, there are many other holidays that are celebrated and certain traditions are followed, take Hanukkah for example. Hannakah is a Jewish holiday that is celebrated over the course of eight days and eight nights. This year, it will be celebrated on Sunday, December 22nd and end on the 30th of December.

“This holiday commemorates the rededication of the Holy Temple in Jerusalem following the Jewish victory over the Syrian-Greeks in 165 B.C.E.” (Ariel Pelaia from Learn Religions).

People celebrate Hanukkah by lighting menorahs (eight candles, one is lit every day), spinning dreidels (four-sided top that is spun during a game), and eating food such as Latkes (potato pancakes) and Kugels (egg casserole).

Finally, there is the holiday of Las Posadas (the lodgings), which is celebrated on December 16th through December 24th. This holiday is celebrated by Hispanic families all over the US, and is focused on celebrating the birth/nativity of Jesus Christ. On Christmas Eve, families gather to celebrate Jesus’ birth with a feast of romeritos (baked shrimp), bacalao (dried cod fish), roast turkey, and Christmas salad. In the U.S., Las Posadas is somewhat similar to Christmas. Celebrations included Christmas trees and presents, and the promise of Santa’s gifts. No matter the differences, all holidays have special meaning to those that celebrate them, and it is important to understand different cultures and customs during this holiday season.