Impacting the Future with New Technology 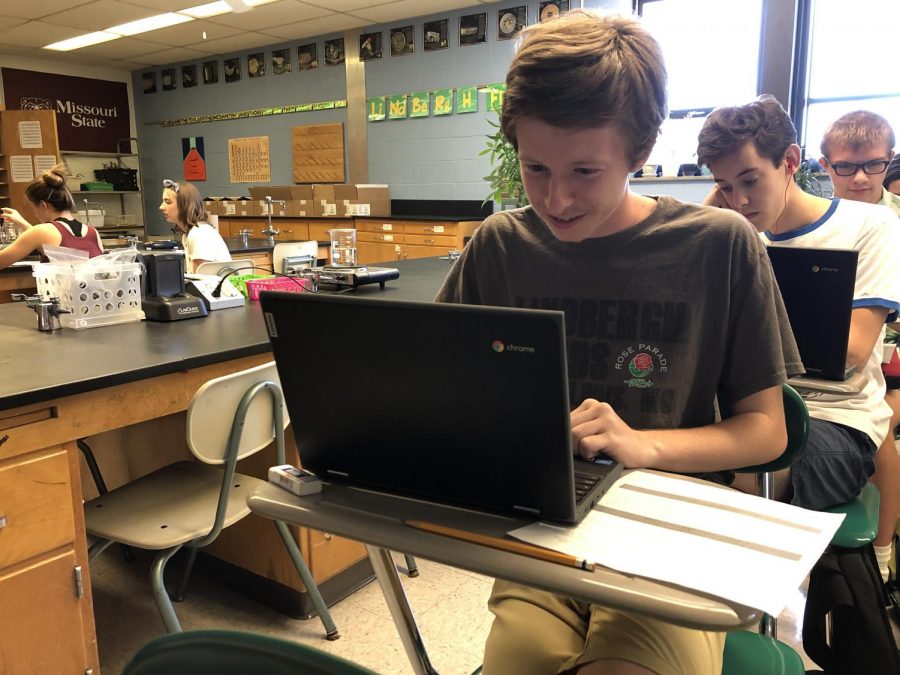 Martyn Seeker (12) works on a chemistry lab assignment in Mr. Dougherty’s class, using one of the district-provided Chromebooks.

With many new changes for the year and a more focused effort on education, the district’s rebranding has begun. In addition to the new website and the “Excellence in Learning. Designing the Future” slogan, one of the new focuses was to incorporate more technology into students’ lives. While having made vital decisions in what will work best, the district administrators have chosen teachers and students to pilot this new initiative.

After assessing the state of the current technology program, district officials decided that it never reached the goals they had hoped for. This was mostly due to the fact that not every student had access to technology that was not provided by the school, and possibly unreliable or no internet access at home.

“The BYOD (bring your own device) system we have in place has been an ongoing challenge. It has never yielded what we have wanted it to yield, which was this idea that technology was enhancing the learning experience,” Tara Sparks (Chief Academic Officer) said.

The current technology program had issues, the main of which  was that it did not cover the students who did not have technology at home, which the new one will fix. It would reach all the way from third to twelfth grade, all of which are currently being assessed, including sixteen students at the high school, whom have been given a device to take home.

One of the classes chosen to be assessed were Mr. Dougherty’s classes. In the past, he had used Google Classroom to have some assignments to be turned in on. Now with the new initiative in place, he will be able to move to more computer based lessons, including a new app, Canvas, meant for teachers to have materials and assignments available online for students to view.

“I will use the technology to implement Canvas more, allow my students to turn more assignments in online, and to make more engaging assignments,” Daniel Dougherty (Science Department) said.

With technology playing a bigger role in society, schools are taking advantage of students’ interest in it, in hopes of a better and more focused learning experience.

“The fact that we know that we are studying this, and that it is a priority to us, means that we will get it going as soon as we can,” Sparks said.